The Manoir d’Ango was built between 1530 and 1542 by the Dieppe ship-owner Jehan Ango. It is the work of Italian architects and artists. The southern wing of the manor includes a loggia and a gallery with four bays. The upper part of the south wing is decorated with frescoes by 16th century Italian artists. The entrance to Ango’s manor house is through a vaulted passage between two buildings, one of which has an octagonal tower. Local tradition says that from this tower Jehan Ango could observe his boats entering and leaving the port of Dieppe.

As Governor of Dieppe, he decided to enlarge and embellish the Castle and he also became a major patron of the St Jacques’ church in Dieppe, adorning the nave with small Italian-style chapels. In a steady stream, his ships brought the sandstone, flint and granite from Brittany which the Italian artists used to make the chequerboard pattern in the walls.

Ango was financier to King Francis 1st and contributed a large part of the ransom necessary to free the King after his capture by Charles V at the Battle of Pavia. Once free, the king decided to visit Ango and came to Dieppe in 1532, accompanied by his consort Queen Claude and all the courtiers from Fontainebleau. Ango welcomed the king to his magnificent palace and to the castle where he organised sumptuous festivities as if he himself were a prince. On this occasion Ango put his entire fleet at his sovereign’s disposition. The king repaid him with many honours and privileges including rights which gave him complete freedom on the seas to fight the king’s enemies. He was made Admiral of Normandy and the king confirmed his title of Viscount of Dieppe, giving him authority over the wide area from Le Tréport to the Seine valley. Ango also became the King’s councillor for maritime affairs and he immediately proposed the construction of a new port, Le Havre. The king accepted the idea and Ango, who had at his disposition a great number of Italian artists, sent his famous architect Bellarmato to draw up plans for the new town.
The influence of the Viscount was felt everywhere. The riches accumulated by his sailor-explorers had made him the richest man in the kingdom. He negotiated with the Republic of Venice and blockaded Lisbon, forcing King John III of Portugal to accept his demands and send his ambassadors to Dieppe.

About 1553, he undertook the building of a summer residence which would exceed in splendour anything he had built before. He may even have summoned Leonardo da Vinci from Genoa to decorate with frescoes the great first-floor gallery and the loggia with its carved columns. The Italian sculptors and architects also left other superb examples of their work in Rouen and Le Havre. This renaissance palace of pleasure became at the French Revolution, the Manoir d’Ango, a farm and then a source of building materials until 1927.

The Manoir d’Ango surrounds one of the largest dovecotes in the world which indicates by its size the power of the Viscount. King Francis 1st returned here about 1540 with his mistress Diane of Poitiers, wishing to show her “the most beautiful residence in Normandy”. The strong links developed between the king and Ango are illustrated by Francis 1st ordering the digging of an underground passage between his castle at Arques and that in Dieppe. The passage was filled in after Ango’s death.
Ango married Anne Guilbert, descendant of William the Conqueror and the Dukes of Normandy but the couple remained childless. The Viscount of Dieppe remains to this day the greatest French ship-owner of all time. His ships, steered by exceptionally talented navigators, voyaged all over the world. They discovered eastern Canada, which Ango called Acadia. He sent his best captain, the Italian Verrazano, on an expedition which led to the discovery of the port of New York and the coasts of New Jersey, Delaware, Virginia and North Carolina. 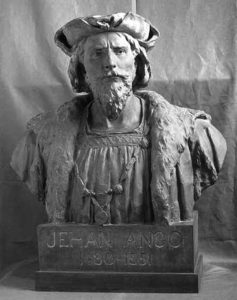 Jehan Ango, the rich and famous Renaissance ship-owner, was born in 1480 in Dieppe. At this time there were many ship-owners in the region of Dieppe, the second sea-port of France but rapidly Jehan Ango, a very intelligent man of liberal temperament and loving splendour and luxury, stood out above the others. During the first part of his life he crossed the seas from Africa to the East Indies as officer and then ship’s captain. These voyages taught him navigation skills and ensured the success of his future explorations. When his father, also a ship-owner died, Ango inherited the family fortune and left seafaring. He chartered new ships and his sailors were pirates as well as lords. Soon he had acquired a substantial fleet which he sent to Genoa to bring back the best artists of the time. In Florence, he made contact with the Medicis.

He became a banker, then Governor of Dieppe and its Castle and developed the town which became the third town in France with Dijon, the town of the Dukes of Burgundy. He was made Viscount of Dieppe and through him, the town experienced an effervescence of ideas, of knowledge and of inspiration to artists stimulated by the presence of Italian painters and this encouraged in its turn encouraged exploration by seafarers.

Ango built a winter palace entirely carved in wood beside the port opposite the Arques castle, which he could see in the distance from his windows.

Jehan Ango was a great art collector and humanist, recognised and extolled in courts throughout Europe. He received simply and without pretention all those in Normandy who appealed to his wisdom or his vast knowledge and this gave him lasting popularity. As patron of arts, sciences and letters, he made Normandy a second northern Italy – he was sometimes referred to as the “Medici of the North”. Many of today’s population in Normandy descend from the Italian families who were summoned here by the Viscount of Dieppe during this splendid renaissance period.

In 1545, King Francis 1st ordered a battle against the English and Ango’s fleet was completely destroyed. For the first time the King had gone against the advice of his maritime councillor, servant and faithful friend. The Viscount of Dieppe had no illusions and accepted this defeat with the tranquil serenity of a true humanist philosopher. In 1551, the great patron of the arts, now a ruined man, died peacefully at the age 71 in Dieppe castle. He is buried in the St.Jacques church in Dieppe